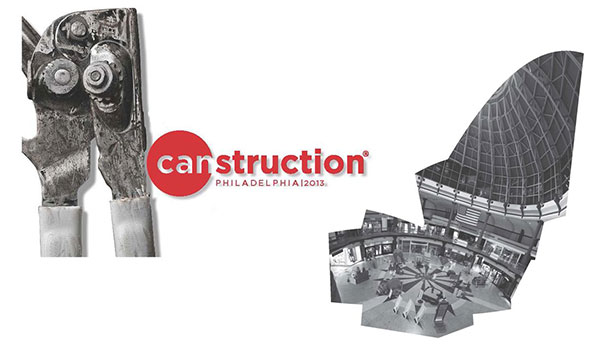 CANstruction® is a non-profit organization that holds annual design and build competitions to construct giant sized structures made entirely of canned goods in major cities. The structures are then judged and put on display to the public for a week.  My name is Dana Barbine, and until recently I worked as part of the Marketing team at Array.  While I’ve moved onto a new career, the adventures we had during CANstruction will always be remembered!

After that week, the structures are dismantled and donated to a local food bank.  AIA chapters across the country hold CANstruction competitions in their respective cities and this year Array participated in Philadelphia CANstruction 2013 to benefit Philabundance.

When our team decided to participate in CANstruction we knew that we would be helping a very worthy cause.  We also knew that raising the money to purchase the 4,097 cans for our structure would be quite a challenge, which is why we owe a huge thank you to our sponsors Array Architects, McGrory Glass, Armstrong, Fessenden Hall Inc., Architex, Maharam, Shaw Contract Group, Trespa, Mannington Commercial, S&S Resources, Amtico Collection and Stanley Stephens Co., Inc.

It was a fun experience and perhaps the biggest thing we learned was that a simple, everyday household item would be the answer to our structural design prayers.  Here are a few lessons learned from participating in CANstruction:

Be Flexible:  Our team started planning for CANstruction in January.  Our first meetings were spent deciding what structure to build, if it would be feasible to build out of canned goods and what type of cans we would need.  We contemplated building an igloo with polar bears and penguins, a food truck or a recognizable skyscraper in Philadelphia before we ultimately decided on our final design:  a giant replica of a Hunger Games book with the logo on the front and the slogan “Hunger is Not a Game.”

The majority of our structure would need to be made out of black cans and although canned goods come in many different colors, black is not a very popular one.  We found a great Amy’s Soup can which was mostly black, and mixed in another Amy’s Soup can that was dark green.  Both came in cases together at a BJ’s Wholesale Club, so we were able to save money by buying them in bulk.

For the back of our structure, since the cost of the soup cans was high, we purchased Del Monte Sloppy Joe mix cans that were mostly maroon and black, but would contrast nicely with the white cans that we would also be using.  When designing and planning your structure you may imagine it a certain way but if you can be flexible and make smart decisions it might turn out a little bit different but better than you ever thought it could be.

Conduct a Mock Build:  Before the big event known as “build night,” conduct a mock build, then have another one just for good measure.  Our first mock build night we had 39 cans across and eight cans high.  It looked great and we were feeling pretty good about ourselves, that is until the entire left side came crashing down.  We decided to use rubber bands to add some support.  We tried bands around three cans, bands around four cans, bands every row, bands every other row, everything.  But, no matter what we did we could not get the structure to stand past 10 cans high.

We called in reinforcements and asked architects around the office about what they would recommend.  Someone suggested something that seemed so simple, but crazy enough that it just might work:  plastic food wrap.  At our next mock build we tried placing a layer of wrap between each row of cans and it worked like magic.  The cans locked in better, stayed together without too much tension on either side and the entire structure was sturdy.  It stayed like that all weekend so we knew we were good to go for build night.  If we didn’t have a mock build we would have gone into build night totally blind and would have probably experienced catastrophe (or a CANtastrophe as our first can fall became known as) so a mock build is a MUST.

Expect the Unexpected:  Build night had arrived and our team was ready to start stacking cans in the Rotunda at the Shops at Liberty Place in Philadelphia.

The Array team plus 13 other architecture and engineering firms and students started building at 8pm.  Things were going smoothly until we got to 11:30 pm and row number 19 of 22…

We caught it just in time before the entire structure tumbled forward.  Because of the wrap, it stayed in one piece and we stood there for a few minutes holding it up.  Since we couldn’t stand there like that all week and since we couldn’t risk leaving it and hoping it wouldn’t fall on anyone, we knew we had to get moving and do some problem solving.

We took three rows of cans down to make the structure a total of 16 cans high and 39 cans wide.  Because of our design the subtraction of the rows caused the back of our structure to be unreadable, but we fixed that by building a short wall of cans in the front of our display area.  In the end our entire team was proud of our final product:

The Hunger Games® logo made out of Amy’s® Soup Cans, Bush’s® Baked Beans, DelMonte® Sloppy Joe Mix and assorted Great Value® Vegetables with the slogan “Hunger is Not a Game” didn’t win any awards that night, but knowing that Array donated two tons of food to Philabundance was reward enough.

Our team would like to thank all of our sponsors and colleagues who helped make our structure possible.  We would also like to congratulate all the teams who participated in CANstruction 2013, the 7th annual CANstruction in our city and so far the biggest and the best.