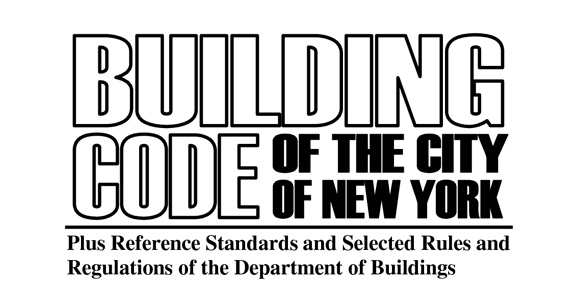 3/7/13 Edit: We are extremely appreciative of the conversations that we’ve had with our clients about the information in this article, as there is very little published data that focuses specifically on these NYC  specific code issues. We will continue to update this article as more products undergo testing and are updated in the future. All changes will be highlighted in yellow.

The primary goal of city and state building codes is to provide minimum standards for design and construction ensuring the health, safety and welfare of the public. Generally as these regulations evolve over time they become increasingly stringent. In the past 10 years, our industry has actually seen a reduction in requirements related to some aspects of building design focused on life safety. Automatic sprinklers actually led to lowering the minimum required fire resistance for some interior finish materials. As codes change and evolve, it is important to continually review commonly used materials for compliance.

Materials used as the finished face of walls and ceilings are typically described as having a fire resistance rating of either Class A, B or C. These classifications are based on the rate at which flame spreads across them and smoke is developed when they are exposed to an open flame. Materials are tested to determine their performance in a fire event, and appropriate classification using the Steiner Tunnel Test (ASTM E84). In this tunnel, a sample is exposed to a uniform fire and the resultant flame spread and smoke development is measured. Materials earning a Class A designation have the least flame spread, however, all three classifications allow for the same quantity of smoke development known as the smoke developed index (0 – 450).

Using these three classifications building codes then describe which level of flame spread is allowable in various spaces within a building based on the use of the space and the need to protect it and its occupants in a fire event. As you might imagine, exits, exit access corridors and assembly spaces are among those that require more resistive materials.

The International Building Code (IBC) is a standard building code adopted throughout much of the United States. New York City, along with other jurisdictions has adopted its own version of the code. While much of the NYC Building Code mirrors the IBC, some more restrictive revisions were made.

Chapter 8 of the IBC defines interior building materials and dictates allowable classes to be used throughout a building. Section 803 defines material classifications and table 803.5 determines which classes of materials are required. In all cases materials adhere to the ASTM E84 method of classification (i.e. all three classes of materials have an allowable smoke developed index of 0-450). This is where the New York version of the building code introduces a further restriction that impacts material options.

The NYC Building Code 2008 further defines allowable materials by adding a section related to smoke developed index. Section 803.1.1 requires the same fire resistance ratings for walls and ceiling finishes as outlined above but adds additional smoke developed index requirements for Exits, Corridors, Occupancy Group I Rooms and rooms with occupant loads of 10 SF per person or less such as assembly spaces. In these areas the allowable smoke developed index is reduced to between 25 and 100. The

inclusion of corridors in this reduction to a smoke developed index of 25 has the potential to severely limit material choices for healthcare projects. The NYC building code defines wall and ceiling materials in Section 802 to include acoustic ceiling systems and wainscoting. This requires that all ceiling tiles, wall protection and decorative wall panels have a smoke developed index of 25 or less. The NYC Building code does not exclude trim and moulding from the smoke development index requirements, but does allow the use of combustible materials for Class C trim for up to 10 percent of the total aggregate area of the walls and ceiling of these spaces (however, this trim is still subject to the smoke development index requirements).

Alterations for existing buildings that submit applications after July 1, 2009 have the option to comply with either the NYC Building Code 2008 or the NYC Building Code 1968. Section 27-348 of the 1968 code includes similar text to the 2008 code and limits corridor wall and ceiling materials covering more than 20 percent of the total area to a smoke developed index of 25. The 1968 code does not define trim as a separate category from wall and ceiling finishes, thus requiring wall base and handrails to be included in the wall and ceiling percentage calculations that are subject to the smoke developed index requirements.

A side-by-side comparison of the relevant sections of the three codes is as follows (with noteworthy items highlighted with bold/red text): 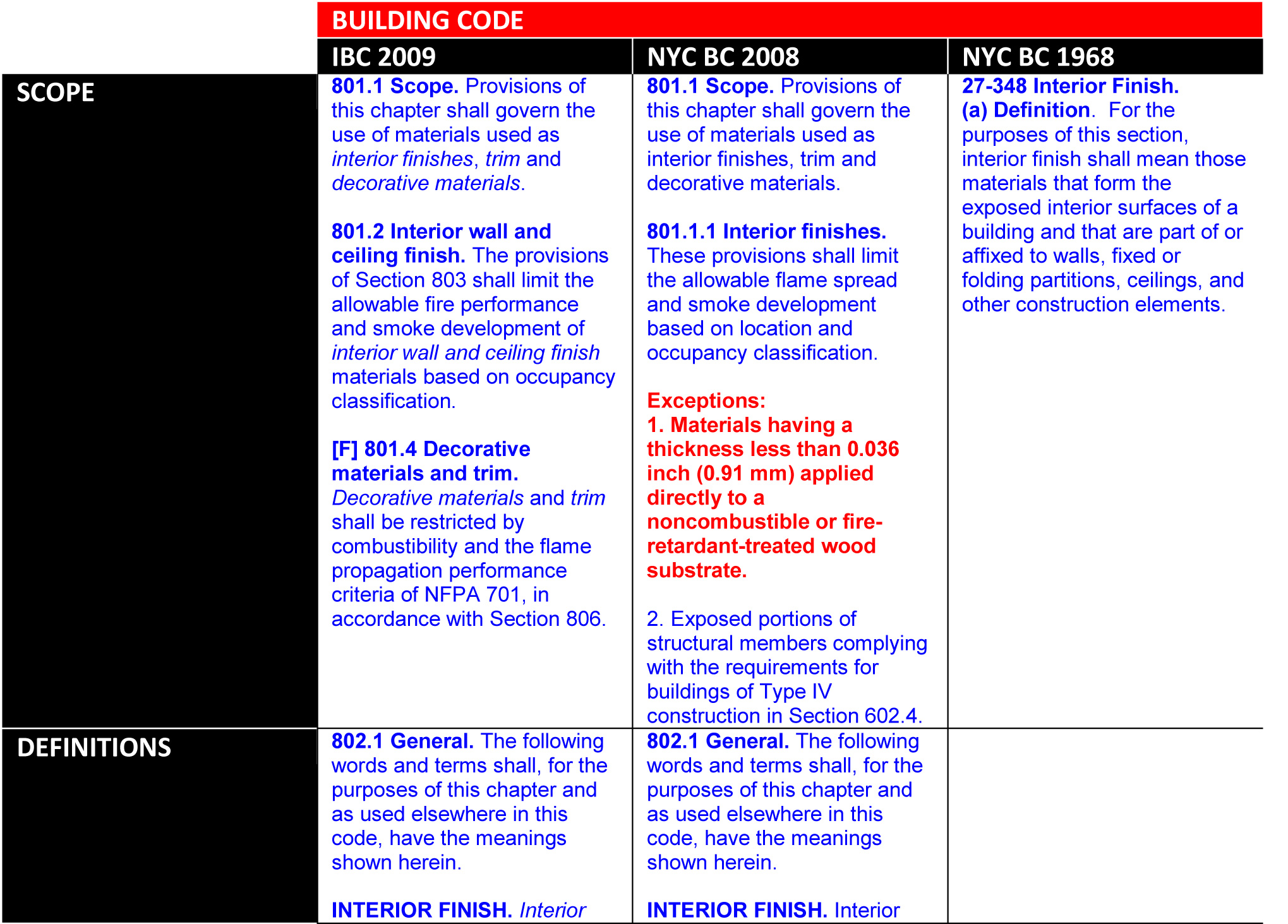 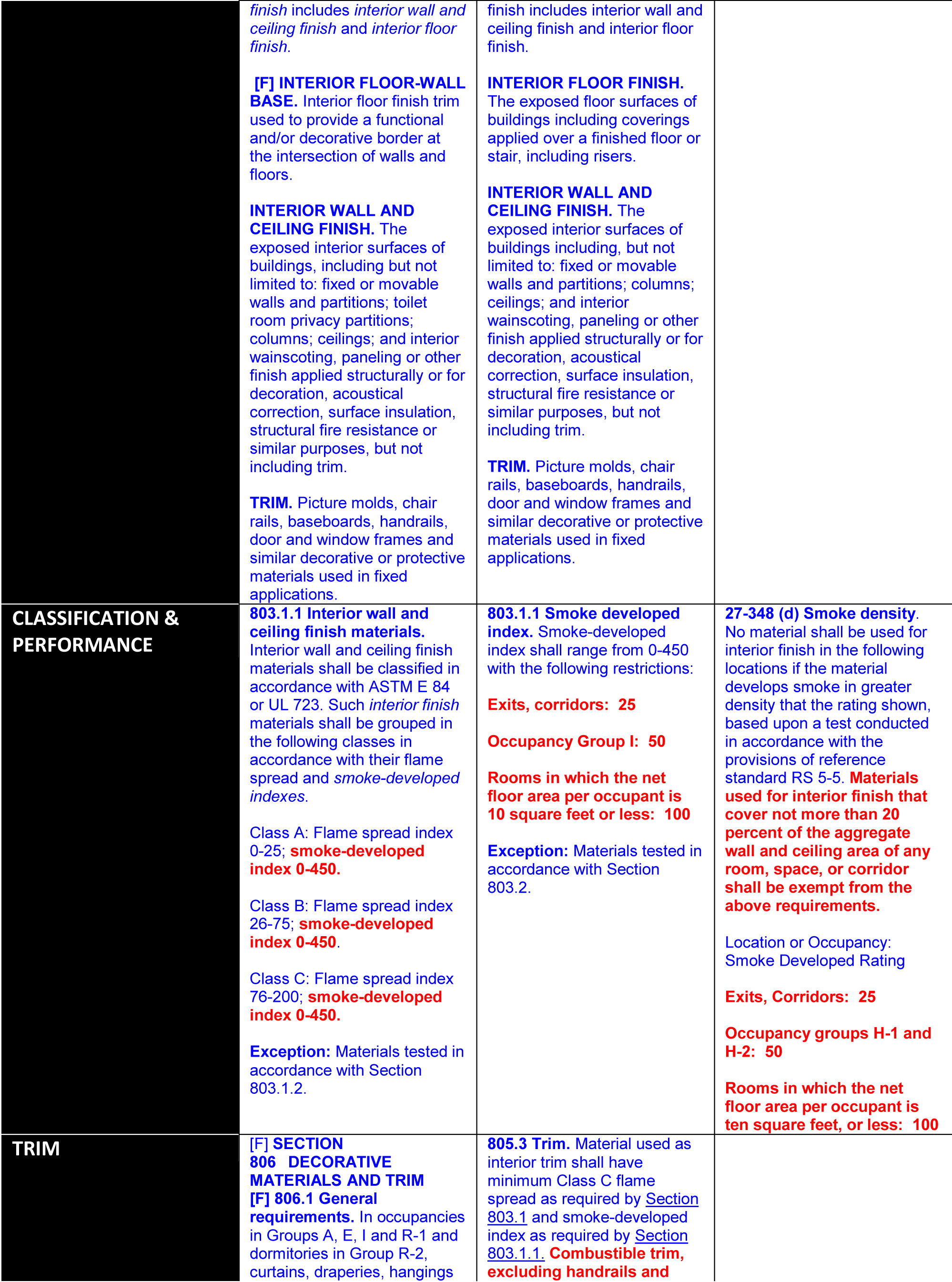 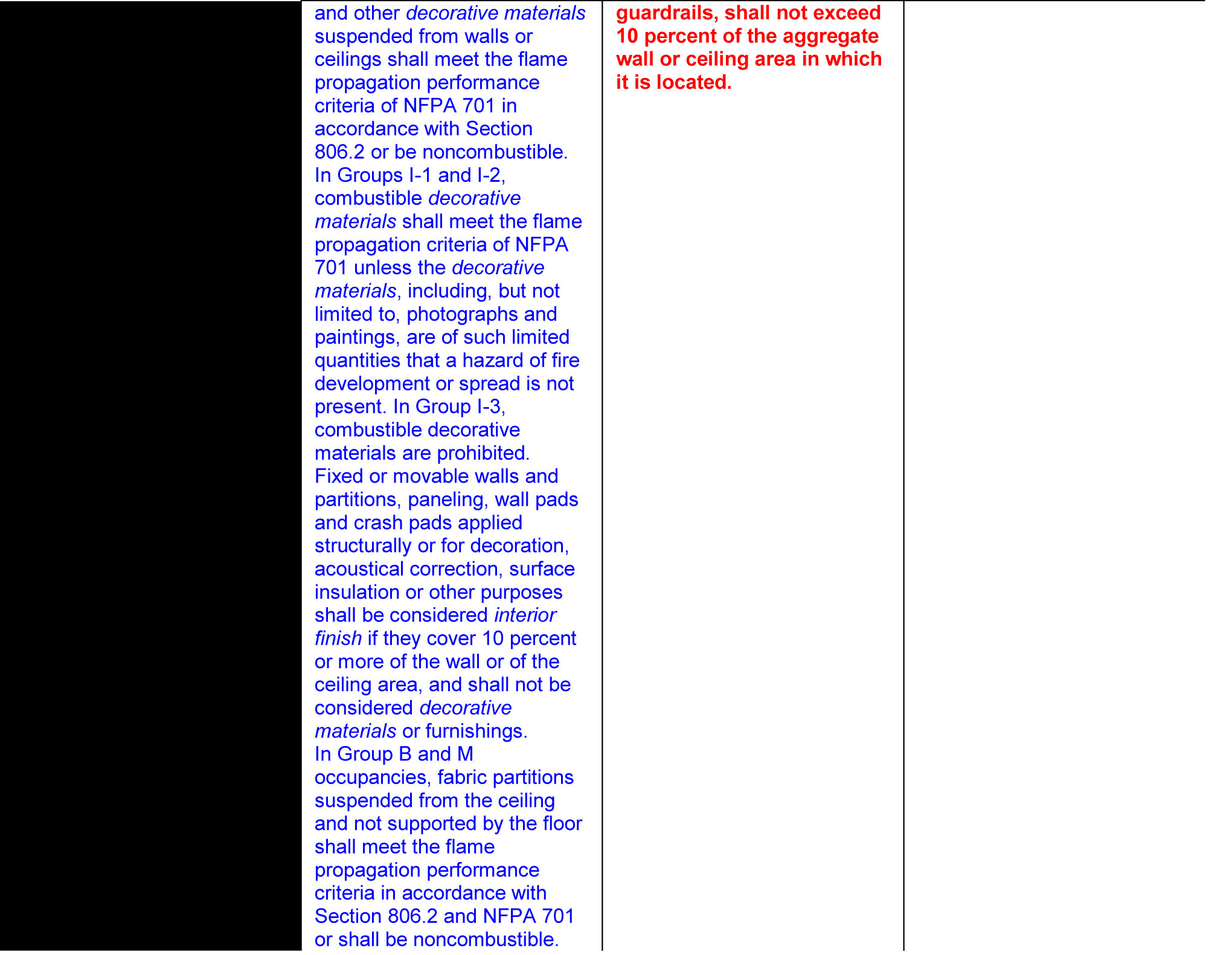 Designers and clients will need to review and research materials carefully before specifying them to be certain that both the flame spread and smoke developed index meet code requirements. Because most building codes do not require a smoke developed index below 450 manufacturers may not have test data readily available. Our initial review of commonly used materials in healthcare corridors revealed several typical materials that do not meet these requirements. The table below lists materials commonly found in healthcare corridors and the currently available smoke developed index (our intention is to update this list frequently as manufacturers provide more testing data): 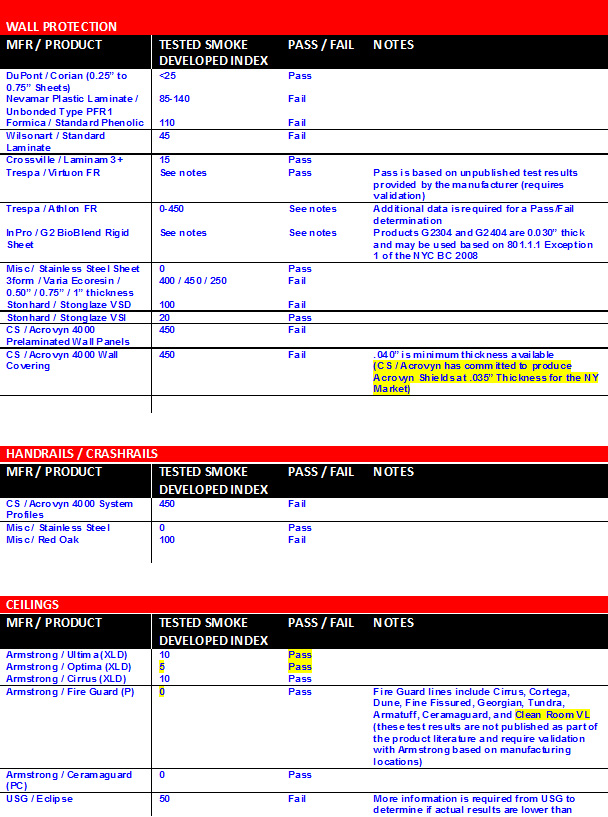 As is clearly evident from the lists above, it is quite challenging to meet the code requirements for smoke index development with the common finish palettes being used by most facilities. As an illustration, if you consider a renovation project that would be subject to the more “relaxed” 1968 code requirements, a typical patient unit corridor that is eight feet wide and has an ACT ceiling with a smoke developed index of 50 at nine feet high would be in violation of the code (since the ceiling material alone would represent 30.8% of the aggregate wall and ceiling area and only 20% is allowed to have a smoke development index in excess of 25). For comparison, this same condition would be in compliance in any other jurisdiction subject to the 2008 (or later) IBC.

Obviously, the 1968 code requirements have been in place for 45 years and have not been strictly enforced by the NYCDOB, however there has been at least one instance of a New York healthcare project being rejected based on the 2008 code – this rejection has created quite a bit of concern within the New York construction industry with an almost universal feeling from product manufacturers that some change in the code is destined to occur. (Another wrinkle in this saga is that most manufacturers have not tested their products to these standards – so we expect a wave of retests and new product data in the future that will hopefully expand our currently limited options).

So … this issue is one that we must monitor closely as it continues to evolve – we encourage all of the building industry community (including facility owners/operators, design professionals, product manufacturers, construction managers, code expeditors and contractors) to participate in this dialogue in hopes of keeping us all informed of how this issue develops and impacts our pr
ojects.